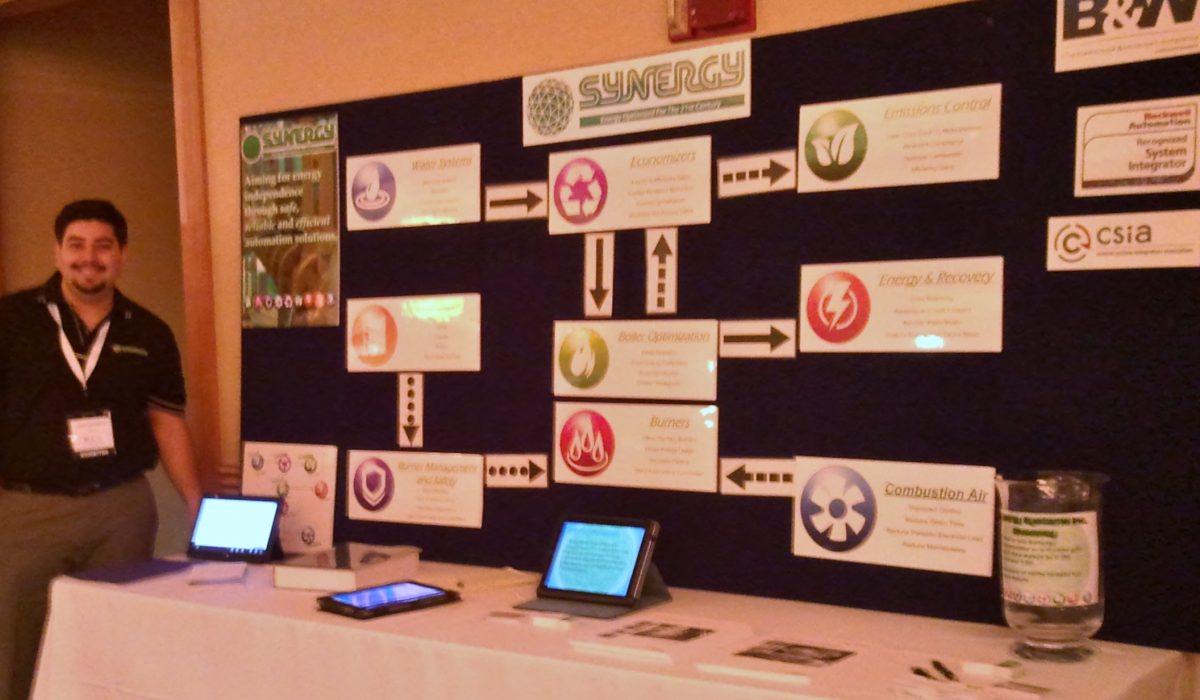 If you were at Harrah’s Casino and Hotel Ballroom in Joliet, Illinois last Thursday, you hopefully made time to see our display at the ISA Will-DuPage Tabletop Show. Our presenters put together a diagram of a boiler, show how each of our solutions fit into the combustion process.

The show was a huge success, with more than 50 exhibitors showing off their industry expertise.

~In other news, our Vice President, Marc Hunter was recently interviewed by Naperville Community Television for his participation in a charty at Eco Gym.

Recently, on Dec 20, 2012, revisions were made to the Clean Air Act’s regulations for major and area source boilers and commercial/ industrial solid waste incinerators.  As most boilers burn some form of fossil fuel, this revision is of great importance to most manufacturing and process plants.<

According to the Overview Technical Fact Sheet provided on the EPA’s website, these changes will not apply to 86 percent of all the boilers in the United States. For 13 percent of boilers, the EPA will simply rely on work practice standards to reduce emissions.

Less than 1 percent of boilers are deemed the “highest emitting” of pollutants, and they will be expected to upgrade their boilers to meet the emission limits. The chart below is from the EPA fact sheet and shows the difference between the March 2011 emission reductions and the 2012 changes.

According to the EPA website, these numbers were reached after reviewing several petitions sent by business and plant owners in regards to the March 2011 rules and additional research performed by the EPA. The chart shows the emission reductions for mercury, hydrogen chloride and sulfur dioxide have increased. On the other hand, the reductions for non-mercury metals and particulate matter have decreased.

In addition to adjusting emission limits, other main modifications to the March 2011 rules include:

Cleaner energy and less pollution obviously benefit the health and well-being of nearby communities, but it can also help your bottom line. Synergy focuses on saving our clients’ money, often by developing control systems that waste less fuel and thereby reducing the emissions a boiler or plant produces. If you are curious about how much money you can save, send us a message at info@synsysinc.com or call 630-724-1969 x12.

Synergy Systems Inc. will soon carry the certification that puts to paper what our clients already know: Synergy is an innovative, client-dedicated business. The Control Systems Integrators Association, also known by the acronym CSIA, was established in 1994 to advance the practices of control system integrators. CSIA believes the work of integrators is essential for the progression of manufacturing and processor plants. Employing a rigorous certification process, they are able to identify and single out top-of-the-line integrators around the world. Like Synergy, these integrators are dedicated to their clients, helping them reduce cost, increase production, use less energy and lower their environmental impact.

Synergy is currently preparing for our first ever CSIA audit, which will solidify our commitment to intelligent automation. Our simple and flexible solutions already prove our innovation and dedication, and CSIA certification will stand as proof of these qualities.

“Clients will be reassured that, because we’ve met the criteria for the CSIA audit, our projects will be professionally executed,” said Synergy’s Vice President, Marc Hunter.

There is a lot to accomplish before we can participate in our first audit which, when passed, will grant us CSIA certification. A true test of teamwork, Synergy’s employees are banning together to accomplish this goal, which will inevitably benefit our clients and our employees.

We are so excited to start this journey. In fact, we are so thrilled that we plan to share the milestones we hit here on this blog, talking about our experience and how CSIA certification is helping our clients, employees and business.

Welcome to the new Synergy Systems website and news blog. We have always striven to create automated systems optimized to your business needs, and now, we will also be providing you with high quality information about who we are as a company and current news in the industry.

There are some key changes to our web site you may want to take advantage of. Along with a more thorough description of the solutions and services we offer, you can explore the people who make up the synergy team under About Us and find the answers to common questions under Boiler FAQ.

Follow us as we continue to strive for American energy independence through innovative solutions, continuous improvement of our knowledge and elite alliances with some of the best businesses in the world of automation.

As we push forward into 2013, expect to see updates about our journey towards certification under the Control System Integrators Association and current news on money saving innovations in the industry.

You’ll be hearing a lot from us as we give you an inside look to what makes Synergy Systems, Inc. the optimal energy solution for the 21st century.