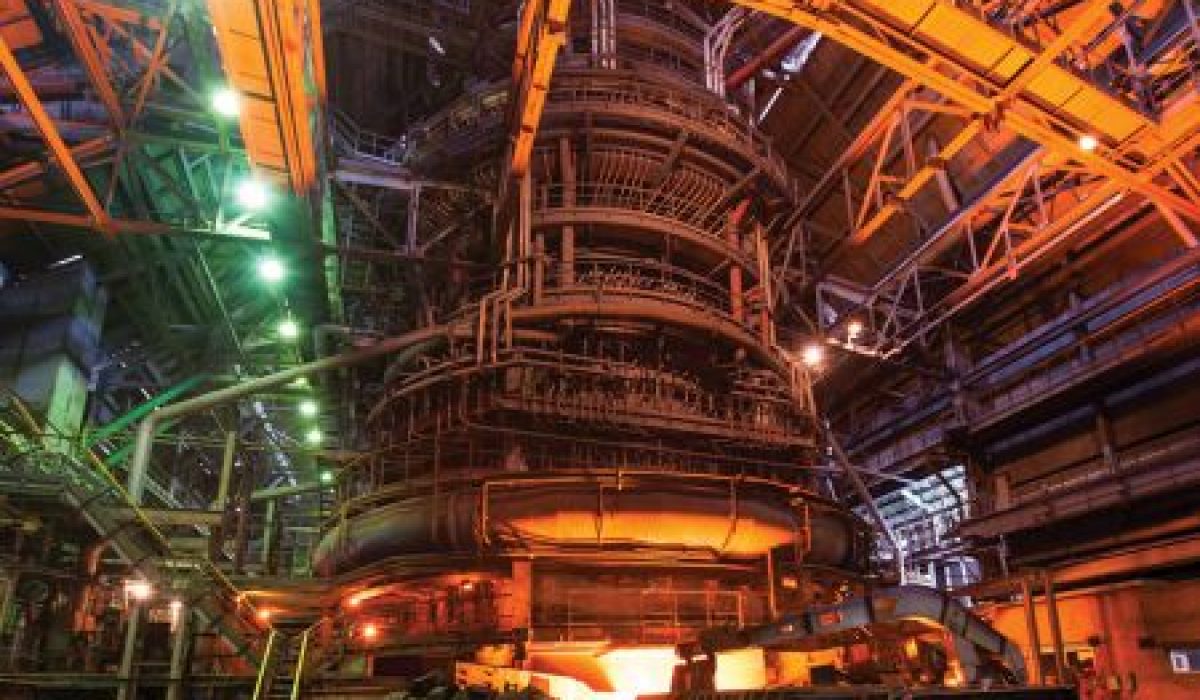 Above: Diligent teamwork between the automation vendor and client was key to successfully upgrading a 25-year-old control system. (Shown: Example of a blast furnace.)

December 2015 - Any steel plant general manager will tell you that the worst part of upgrading equipment, processes, software or anything else is having to curtail production to get it done. When anticipating a temporary outage, the producer builds up inventory to meet contract and scheduled orders, but it can miss out on spot orders. In other words, plant downtime can suppress already slim margins. Many metal producers, however, need desperately to refurbish machinery, and their controls, to push their capabilities into present and future functionality. What if there was a clever way to migrate to the latest technologies while the factory floor hums along at its normal pace?

Synergy Systems Inc. devised a custom solution for an American integrated steel producer that has become a model applicable to other manufacturing industries. Features of the successful implementation at the blast furnace combined long-term planning with patience, smart budgeting, electrical engineering wizardry, flexibility and humility (more on that later). A consulting engineering firm, the company is also a systems integrator for Rockwell Automation. In autumn, Synergy Systems completed its upgrade of a legacy patchwork of controls for a blast furnace and supporting subsystem equipment. 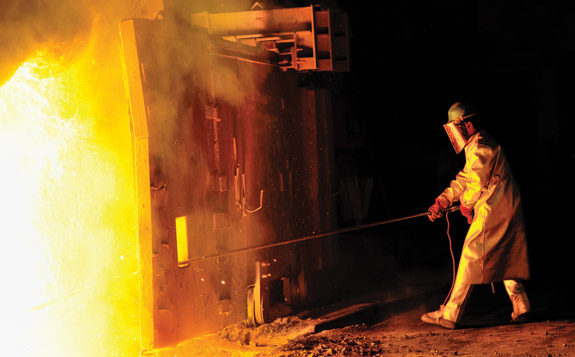 “The client has a blast furnace that had aging control equipment—both old hardware and software,” says Hunter. The key problem with aging hardware is it becomes more and more difficult to find replacement units and stock parts. In addition, the software programs in use were over 25 years old. Most programmers for antiquated software platforms and languages are long retired, and the tools for performing maintenance are limited by obsolete software. “That was the business driver: A limited ability to make modifications and how hard it became to diagnose problems with the furnace using that old technology,” Hunter explains.

The typical systems engineer would recommend the client shut the furnace down, rip out all the old controls, install new hardware, write code, perform factory testing, then recommission the furnace. “Anybody can do that.” Typically, that plan is rejected by operations, and therefore the decision is made to continue to produce with what is in place, which creates a paradox.

The legacy and new control screens were designed for a similar look and feel, which allowed implementation requiring a  minimal learning curve.

Input/output
For those who don’t use it daily, process controls mimic that of a human being doing a particular repetitive task. The eyes, ears and other major senses are the inputs into the system, the brain houses the cognitive decision making and commands the hands, which take actions, in this case the outputs. A good operator pays close attention to the task and responds when needed; a not-so-good operator’s attention flags and may overcompensate when he refocuses on the task. “The brain between the input and output is the control,” says Hunter. In the event an operator’s responses become flawed, problems can arise. That is why companies rely upon computers to stay on task, especially for mundane and repetitive work, and only alerting humans to aberrations in the operation.

“What we effectively did for our steelmaker client was to replace the eyes and hands first—input and output devices.” Synergy Systems replaced the input/output hardware in the blast furnace’s main control system one point by one point, modifying the existing software to read from the new field equipment and verified that each section connected properly and worked together. It then rewrote the control algorithm in the new controller (featuring new HMI graphics) in parallel with the existing system—“all according to the way the process engineer wants it,” Hunter says.

By replacing I/O first and putting a control strategy in place, “the furnace is still up and running and we swing pieces to each new I/O point.” That meant putting a new microprocessor in front of every old CPU from the old platform. “Our application engineers recreate the intelligence within the systems in the new brain by modifying the decisions the old brain makes. Finally, you retire the old brain,” he explains. 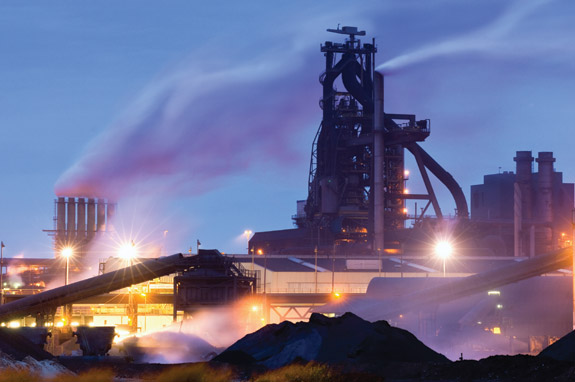 Hard wiring
Another crucial dimension of migrating and integrating new controls, at least for Synergy Systems engineers, was to solicit and receive “constant operator input,” says Hunter, because “we have the opportunity to recreate intelligence in the new brain while capturing all the ‘tribal knowledge’ of operations staff.” It’s critical that future operators learn a blast furnace operation’s nuances, which are second nature for those who have run the plant for 30 years or longer. “All the things an experienced operator does in the process, through his experience, get captured and programmed into the new automation.”

That brings us to humility. Not only must tech-savvy engineers realize that their client knows a lot more about how a particular process actually works than they do, they must bend to the willingness of operators to adopt and suggest improvements. Along with fixing all the items that “never get used” or “that never worked” and “that program is fine, but let me tell you how we have to run the furnace to get the expected yield—safely,” Hunter cites a client “whose most knowledgeable guy prefers working third shift, so our biggest asset is on midnights. But a guy like that is training us as much as we’re training him.”

Creative financing
One of the steelmaker’s requirements, besides keeping the blast furnace online, was to perform the upgrade in a way that could be paid for out of the maintenance budget—in other words, month by month, instead of getting approval for a hefty lump sum capital expenditure.

“It was a phased approach,” taking more than 18 months front to back, but “the client didn’t have to write a capital budget proposal for this. Funded out of maintenance money, it was done as a gradual migration,” says Hunter. This type of financing also makes the project feel rather affordable and the client gets at least 99 percent of what it expected to achieve by tearing the system apart and building it back up at once, he suggests. 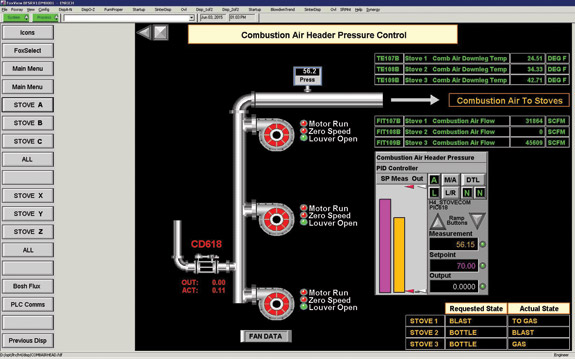 This screen for the new gas injection control system is much simpler and clearer than the legacy version the steelmaker used.

Industry know-how
Synergy had a leg up on securing this job because its engineers have metals experience, says Hunter. “We are experts because many of our people come from the industrial environment, including seasoned people out of steel industry. We are versed in applying—in hazardous locations—computer and communications technology. Electrical engineering is our wheelhouse, and we can build systems to handle heavy, wet environments, dust, heat and corrosion. Additionally, the client can leverage or scale up the new automation where needed.

“When we staff projects,” he continues, “our people understand how to commission the system. Our people work swing shifts to train second and third shifts.” Although Synergy Systems tackles such projects “all the time, this was probably the biggest system we did it on, and the most critical operation.”

When steel demand resurges, Hunter believes the client will tackle Phase II. “They have two blast furnaces sitting side by side, and will do the second one when market conditions allow the investment,” which would again likely be financed through the plant’s maintenance budget. “I think more projects will be delivered like this in the future,” he remarks, because it’s not necessarily the capital spending that creates concern. “It is more, ‘Can we allow a plant outage of an unknown length due to commissioning an entire new control system?’” A typical industrial client cannot allow zero production. “But if we come in and say we’ll never shut you down but it will take longer, and the price tag might be slightly more,” the client is gladdened by the prospect of not losing business to competitors.

Repeatability
Mark V. Urda, president of Synergy Systems and a 40-year veteran of steel plant automation, says the first furnace controls upgrade “went so well that the client wants to repeat that success with the second. That speaks to the fact that we had few bugs and worked with operational and tech support folks to fix the bugs immediately. The outcome was better than we expected.”

As to designing the new automation system and executing on major deliverables, says Hunter, “I hope we repeat that and build a backlog of other clients who want to do this.” The steelmaker’s project manager has already provided references to potential, noncompeting companies. MM